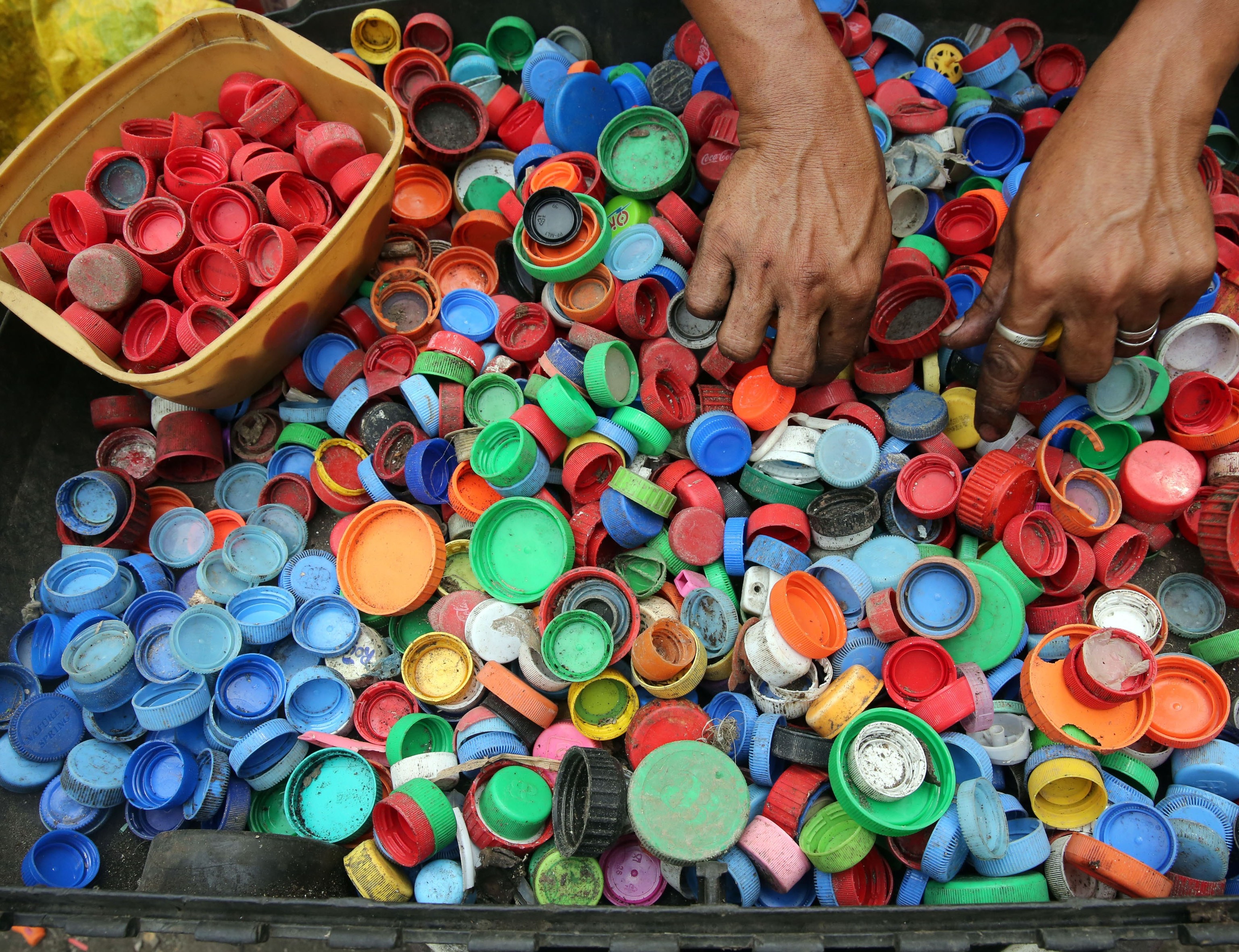 The trend of sustainability and circular economy is currently expanding to become one of the biggest global ones, but what is the definition of circular economy and how does it affect the chemical industry? As stated in the European Parliament: “the circular economy is an economic model based on sharing, leasing, reuse, repair, refurbishment, and recycling, in an (almost) closed loop”. Often linked to the circular economy, nowadays it is impossible not to hear the term “global warming”, which is a phenomenon caused by continuous pollution. Today’s buying habits, which are boosted with special days such as Black Friday and the Monday after that, so-called Cyber Monday, trick people to spontaneous purchasing. This increases the need for manufacturing. What consequences overproduction and continuous consuming habits have for plastic production, and how can we emphasize the importance of the circular economy?

The diagram below by the Statistics Portal describes the evolution of global plastic production from 1950 to 2016 and shows Europe’s contribution to it. Just in 66 years, global production has increased steadily and by 2016 it reached the amount of 335 million metric tons. While Europe covers only approx. 18% of the whole amount, China is the leader “accounting for around one-quarter of the global production”. 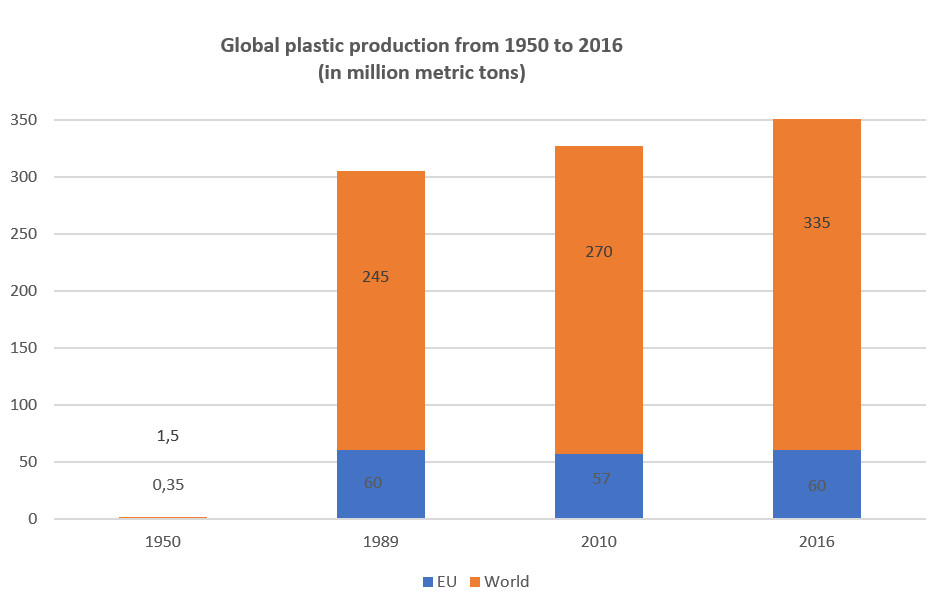 The National Geographic describes the global production of plastics from 1950 to 2015 in the graphic down below dividing it into the different industries where plastics are needed. It states that “The largest market for plastics today is for packaging materials”. According to the same article, the production started in the 1950s, after inventing the plastic in the late 19th century, and so far, it has reached the amount of 448 million tons. 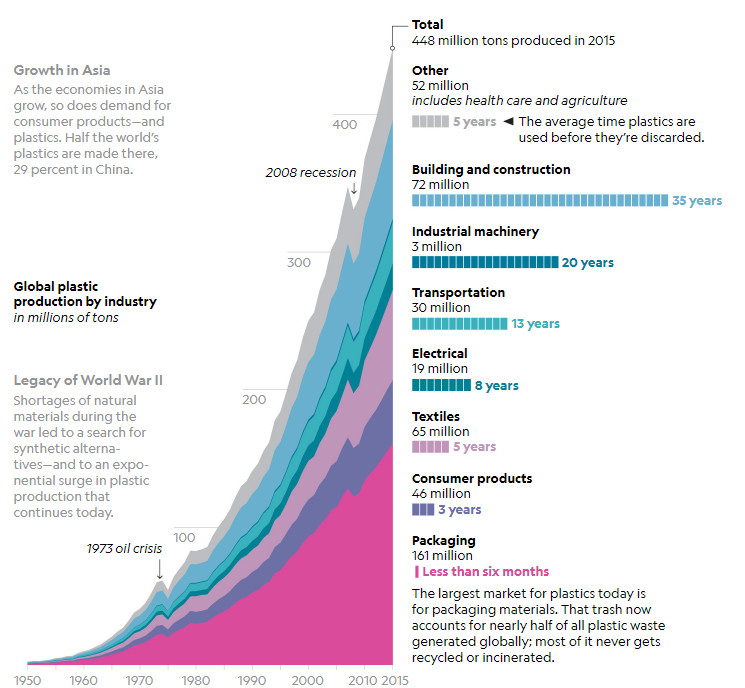 The starting point to produce the first synthetic plastic came surprisingly from the billiard game. Indeed, John Wesley Hyatt decided to catch the offer for a firm in New York offering $10,000 to invent a substitute for ivory because wild elephants were suffering from the use of it to produce billiard balls. With Hyatt’s invention, the revolution of plastics as possible. “By treating cellulose, derived from cotton fiber, with camphor, Hyatt discovered a plastic that could be crafted into a variety of shapes and made to imitate natural substances like tortoiseshell, horn, linen, and ivory”. The highlight of the growth in the industry happened during WWII in the US, when the production increased by 300%. Indeed, after the war, people started to use plastics even more because they were able to invest more money in commodities.

In the first place, plastic was invented to create new materials and avoid being dependent on natural resources such as wood and stone. Nowadays, we are facing the problem of drowning into the plastics because they are everywhere. Bags, packaging, and bottles are just a small example of how much we are using plastics in our everyday life. Problems with these materials not only concern the overproduction and usage but also their disposal and recycle. Back in the 1980s, there was almost no recycling done, on the other side, it was 18% in 2015. Countries such as Germany pay a lot of attention to differentiate a household’s waste, but there is much more to be done at a global level. As a matter of fact, recycling can be a challenge depending on the type of product and how it is produced. 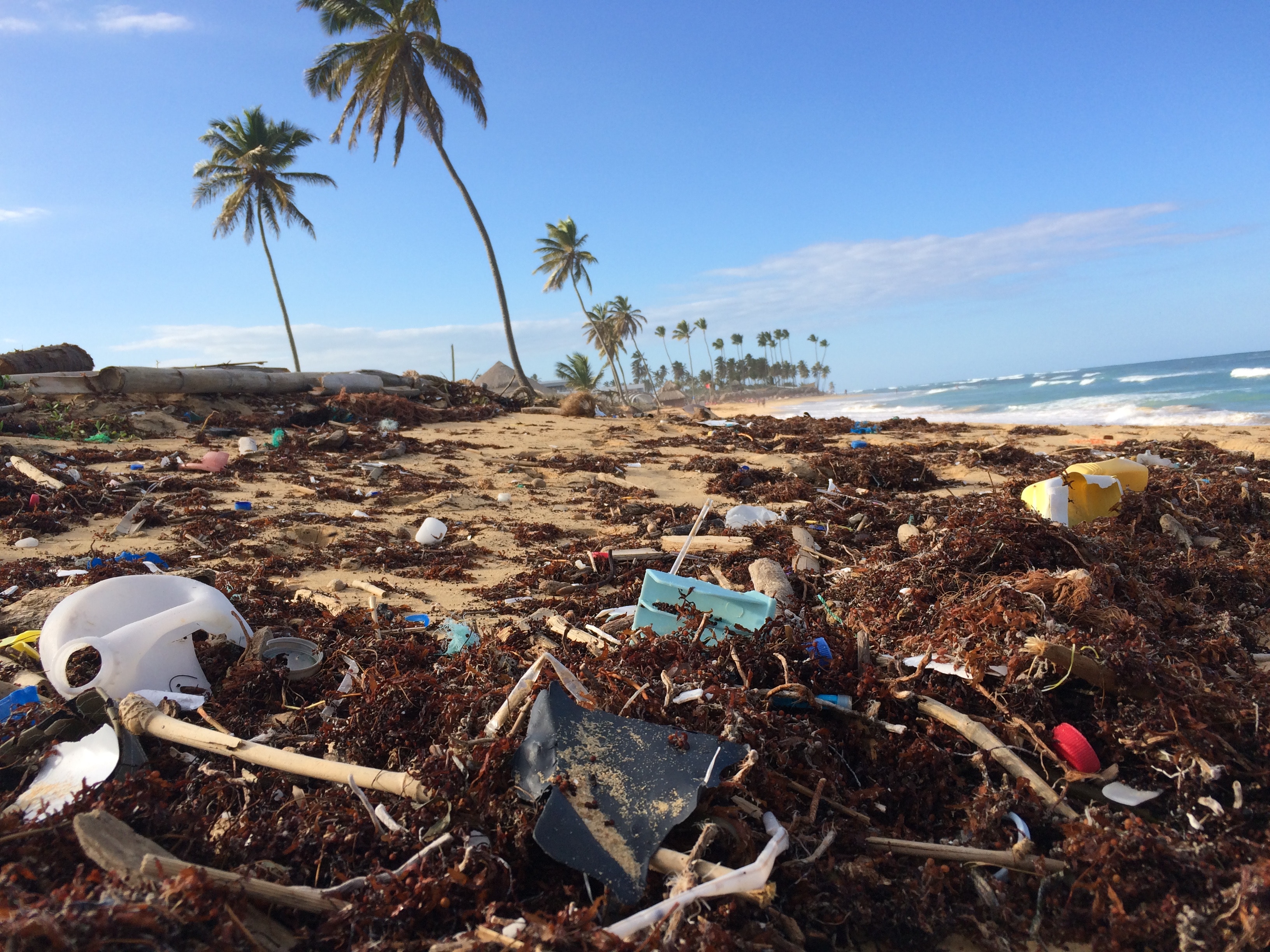 Photo by Dustan Woodhouse on Unsplash

Today, people are more and more aware that plastic waste is everywhere - including oceans and our food – and they feel the urgency of switching to a more sustainable lifestyle and therefore the economy. In order to satisfy customers’ needs and desires, producers feel the pressure to accelerate the process of shifting into recycling and circular economy. Analysts state that among the actions they are going to take this year, one is forging partnerships with plastics collection and recycling firms. Manufacturers are also testing nascent technologies, in order to convert postconsumer mixed plastic waste into useful chemicals, and they are even planning commercial plants. More than 60 technologies are being developed, as Closed Loop Partners says in a recent report. However, as Pieterjan Van Uytvanck, Principal Sustainability Analyst for the consulting firm Wood Mackenzie, says “2020 is set to be another busy year for the transition from virgin to recycled plastic production, but companies are starting small”.

Nevertheless, the momentum to recycle is becoming global. For example, India is considering new laws to drive up recycling and has already introduced legislation banning single-use plastics in certain applications. While in the US, California is aiming for new plastics recycling requirements for manufacturers this year. 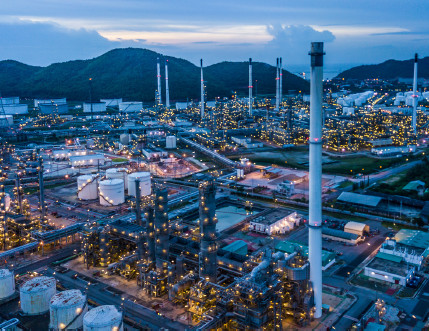